Edward O. Thorp's A Man For All Markets 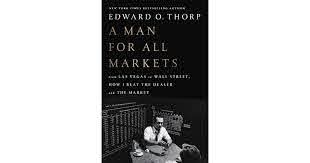 Edward Thorp is one of America’s great personalities of business and academia, although perhaps he is not as famous as the Warren Buffetts, Elon Musks, and Richard Branson’s of the world.

Thorp, born in 1932, has been a mathematics professor, author, hedge fund manager, and of all things - a renowned blackjack card game researcher! Nassim Nicholas Taleb, in his foreword to the book, notes that Thorp is the first modern mathematician who successfully used quantitative methods for risk-taking - and most certainly the first mathematician who met financial success doing it.

The juxtaposition of Thorp’s autobiography and Taleb’s Foreword is interesting. Taleb published his book entitled ‘The Black Swan: The Impact of the Highly Improbable’ in 2007. As a result, the old expression ‘Black Swan’ has become popularized - or perhaps we should say repopularized for events like the 2020 Covid-19 Pandemic? The oldest known reference is from the Roman poet, Juvenal, who wrote that ‘A good person is as rare as a black swan’. In The Black Swan, Taleb studies the impact of rare and unpredictable events.

Thorp’s business and academic career have been concerned with probability. Thorp studied mathematics and earned his Ph.D. from the University of California, Los Angeles in 1958. He went on to teach mathematics at the Massachusetts Institute of Technology, New Mexico State University, and the University of California, Irvine. He tells an ultimate math geek story about showing up for an important scholarship exam without a proper slide rule.

He specialized in applying modern probability theory to several fields, notable gambling and investments. He wrote a famous book and best-selling book entitled Beat the Dealer in which he presents a point system for winning at casino blackjack. He invented a system of card-counting that appeared to be so successful, the casinos changed the rules of their blackjack games. Among his many accomplishments, he invented the wearable computer in 1961 to assist with his card-counting.

A Man For All Markets includes some very entertaining stories and characters from the casino era of Thorp’s life and career. There are disguises, scrimped gambling money, rogues and villains. He has always claimed that this whole thing was an academic exercise but he seemed to be having too much fun for us to entirely believe this. He is also vague about how much money he made from his gambling expeditions.

He does not say as much, but we might assume that he earned enough from gambling to enter the slightly more (or less?) respectable business of hedge funds and begin to gather investors. He earned many millions of dollars with his hedge funds and claimed to have returned more than 20% a year over more than a quarter-century. Among other quantitative tools, he used something akin to the options trading model that eventually won a Nobel Prize as the Black-Scholes model.

In this section of the book, he drops some of the big names in investing such as Warren Buffett. More intriguing is his encounter with an ambitious, crusading young Rudolph Guiliani. We do not learn much from Thorp about what took place with Giuliani, but shortly after this encounter, Thorp winds up the hedge fund he was operating at the time before starting another one. A wonderful thing about writing your autobiography is that you get to tell the story!

The book concludes with some standard-issue financial advice that could have been left for lesser mortals to retail. This material might have been fruitfully replaced with a greater awareness of others who worked on similar ideas in the same timeframes. Doing so might have lessened the sense of self-congratulation that permeates A Man For All Markets. Don't let that discourage you. This is a great read by an amazing person you should get to know.