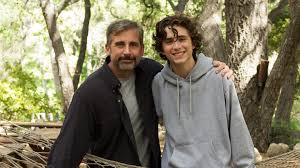 Most of my short film reviews look at great classic films. This movie is different in that it received a mixed reception when it was released in 2018. On Rotten Tomatoes, the aggregated rating for Beautiful Boy is only 67% and some of the reviews are scathing.

The low score for this movie is something of a puzzle. The film offers good acting by rising star Timothee Chalamet, reliable Steve Carell, and excellent supporting actors such as Maura Tierney and Amy Ryan. It is well-made and has moments of poignancy and intensity. Beautiful Boy is based on separate memoirs written by David Sheff, the father in the story and Nic Sheff, the son. The film reflects some of the limitations of personal memoirs written at a young age or a narrow point of view, but within the given framework the film is well-written.

Beautiful Boy tells the story of a father-son relationship during a time when son Nic (Timothy Chalamet) is in his late teens and early twenties and addicted to drugs. They are close but there is a challenge to the father’s assumption about how close they are. There are parts of Nic that David (Steve Carell) knows nothing about.

With the co-operation of his wife Karen (Maura Tierney), and Nic’s mother and David’s ex-wife, Vicki (Amy Ryan), David variously tries to help his son, apply some tough love or at least protect the rest of the family from Nic’s addiction or watch helplessly while the addiction takes over Nic’s life. The film includes several scenes featuring Karen and her two young children with David and also scenes with Nic’s mother, Vicki. Even so, we do not get a good sense of their experience of Nic’s addiction or David’s inattention to his marriage with Karen and the two little kids.

Likewise, we do not receive strong impressions of the worlds inhabited by David and Nic. David appears to be a successful writer. We see him in an office with the name of the iconic magazine, Rolling Stone, on the wall. We are not introduced to David’s colleagues, friends, or family members. Along with a lack of social life, David does not appear to have a religious or political life. We assume that he has a healthy financial life because he lives in a beautiful house in the forests of Marin County, north of San Francisco. He pays for Nic’s rehab experience with a credit card. When David wants to learn more about addiction, he hires a psychiatrist to help him understand what is taking place or goes online.

Nic’s life is portrayed as several more steps removed from the material world. He is shown as a student and in several relationships with young women, but as a young adult, Nic lives the life of a drug addict without visible connections to the legal or economic systems. Somehow he drives a car and lives his life without visible sources of funds. Nic consumes illegal substances without interacting with the legal system. He breaks into his parent’s home, but the police are not called. He is with someone when she overdoses, but he drifts away from the situation. In one harrowing scene, he drives while under the influence but is not stopped, does not crash, and retains use and ownership of the vehicle.

We do see David and Nic interact with the substance abuse rehabilitation system. As well, some public addiction information is provided on the black screen at the end of the film. There is a complex scene in which Dad smokes Cannabis with Son and talks about his prior drug use. These real-world interactions do not disturb the ethereal impressions we receive for David and Nic. Nic drops in and out of a family’s life. David comes and goes from the family and work to try to save Nic. Timothee Chalamet floats through his scenes with charm and a wan smile. Steve Carell continually frowns even through the delight of watching his two other children be adorable.

Despite these shortcomings, the scenes between father and son are moving. There is an especially intense scene with Karen and a car chase. The anguish of drug addiction for the addict and his family is palpable particularly for those who have some acquaintance with this experience. The film ends with good news: Nic has been drug-free for eight years.