Brief Review of a Classic: Booker T. Washington's Up From Slavery

Booker T. Washington (1856? - 1915) was born into slavery and rose to become one of the most prominent American public figures and intellectuals of his time. Washington lived and worked in a straight line - he committed his career to the school he was instrumental in founding, Alabama’s famed Tuskegee Institute. Building up the school and his fund-raising meetings and speeches took him to the power and wealth centres of the East Coast of the United States where he earned a reputation for fine oratory and reasonable, responsible views by the standards of influential persons of his day.
Perhaps it was unavoidable that such a prominent African-American would be a controversial figure in his day as well as our time. In some of his talks and writing, he appeared to favour segregation. Some of his audience might have thought he favoured training in manual labour rather than intellectual education for professional careers. He seemed to design his public presentations for white audiences and fund-raising purposes rather than forcefully representing the interests of African-Americans.
For example, Washington argues that if African-Americans acquire education and practical skills, they will advance through their economic contributions. The critique of W.E. Du Bois, a prominent contemporary African-American figure, was that there were structural constraints that prevented the advance of the black race.
This divide between Washington and Du Bois remains relevant today.
Washington’s book, Up From Slavery, is a classic of American literature. It has a stylistic simplicity and clarity that reminds us of the American legends of Abraham Lincoln and that other Washington, George. He tells the story of his childhood poverty in the South of the Civil War period, moves on to the early days of his education and founding of the Tuskegee Institute and then on to his fundraising efforts for the school which seem to have occupied much of his life’s work.
This is a book designed to inspire the hard work, hope, and ambition of a young reader or listener and also reach the ear of a sympathetic donor to Booker T. Washington’s cause. There is much talk of early morning rising, long work hours, self-sacrifice and honesty, and the success that comes from these efforts.
A challenge with reading an older work that is so accessible is to engage in anachronism. We easily flip the pages of the book without observing its historical context and distance from our present-day discussions of race. This is riskier for non-Americans. It makes more sense to appreciate how Booker T. Washington is working out an early approach to important problems just as others were working in the same era on the electric light, motorized transportation, and the telephone. Rather than attack a writer who wrote more than 100 years ago, more to the point might be to ask why technology has advanced so far, but American race relations may be less optimistic than in Booker T. Washington’s time? 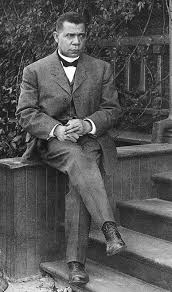