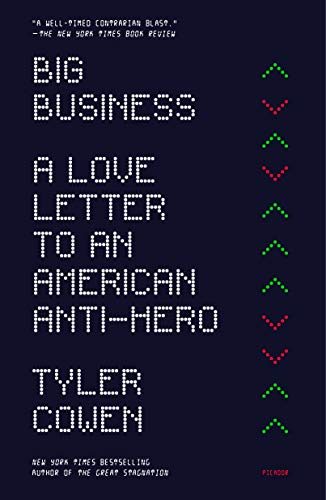 Tyler Cowen is an American economist who teaches economics at George Mason University. In 2011, he was ranked at number 72 among the ¨Top 100 Global Thinkers¨ by Foreign Policy Magazine. He has written admired books. David Brooks called Cowen one of the most influential bloggers on the right¨.

Predictably, I wrinkled up my nose when I saw the title for this book, ¨Big Business: A Love Letter to an American Anti-Hero¨. How could a respected economist, even a ´right-wing' economist, write a love letter to big business?

It turns out that this is a winsome and irenic look at American big business. The book is pleasant, easy to read, and not over-long. I wondered if the easy feel of the book was an intended rebuke to the dense tomes of French, left-wing´ superstar economist Thomas Piketty?

Cowen complains that a lot of Americans do not like big business: young people, Bernie Sanders supporters (!), the Media (and Social Media), ordinary Americans, Trump Supporters and the Conservative Right.

A less intrepid soul might surrender to the popular view of big business as a domineering bully. For example, Franklin Foer made a good case against the tech giants in his book ´World Without Mind: The Existential Threat of Big Tech´.

But Cowen plunges on to argue that the most common criticisms of American business do not stand up to scrutiny.  What he does is work through a few of these criticisms - probably too few in my view - and come out the other side having vanquished the opponents of big business.

In Chapter 2, Cowen asks the question ´Are Businesses more Fraudulent than the rest of us?´ The buoyant tone contrasts oddly with the demoralizing content. He argues that American businesses are no less ethical than individuals. Rather than launch into a discussion of the basic goodness of ordinary people, he illustrates dishonesty and fraud committed by ordinary people and includes a notable discussion of the unethical behavior of professional ethicists. If companies are bad, it is only because people are bad. He dismisses any claim that particularly bad people are attracted to the corporate world. He concludes the chapter with assurance that the actions of corporations are influenced by the importance of trustworthiness to their public reputations.

From there, he launches into chapter three, Are CEO´s Paid Too Much? Clearly, only the staunchest business advocate will suggest that business executives are paid fairly so it will be interesting to see what Cowen does here. Apparently, people who are able and willing to run large organisations are hard to find. The organisations they run are so large and complex that these individuals merit enormous pay packets. He devotes pages to the benefits of long-time CEO´s to their corporations. Unfortunately, he does not address the possibility that there may be many people who might be capable of running these organisations if only educational and executive opportunities were offered to a wider range of people. He certainly does not address the puzzling question that if competent CEO´s are so hard to find, why is it that some companies need to look no further than the founder´s family for highly paid leadership. For instance, Lachlan Murdoch of News Corp. He also does not address the questionable culture of the celebrity CEO or the problem of weakening corporate governance.

We can expect Chapter four to be deeply conservative when it asks, ´Is Work Fun? Basically, Cowen says that working for a large corporation is great. The only problem he addresses is that of harassment. Workers are not oppressed and are better off in typical modern American corporations than they would be managing themselves or working in labour-controlled organisations. Cowen is blissfully unaware of suffering among workers in the Rust Belt or Amazon warehouses, laid off in favour of cheaper offshore labour or the ordinary cruelties of corporate life. He does not mention the misery of lowly contract teachers in his own American university system.

In chapter five, Cowen asks ´How Monopolistic is American Business, chapter six, Are The Big Tech Companies Evil? And Chapter Seven, What is Wall Street Good For, Anyway? And Chapter Eight, Crony Capitalism: How Much Does Big Business Control the American Government. By now, you get the idea. In a book so ideologically driven, you don't really need to do more than skim.

Of course, corporations are not overly dominant and there is plenty of competition. He ignores the role of government in maintaining free markets. Google, Facebook, Apple etc. are just fine. He believes that venture capital drives innovation and Wall Street enriches ordinary Americans. Wall Street is even good for foreign countries. Of course, corporations are not overly influential in Washington.

Although much of the book is bland, predictable right-wing ideology, Cowen´s conclusion is slightly more interesting. He argues that we dislike corporations because we tend to personalise them. We want them to be our friends and are disappointed when we learn that they are not. He summarises the book’s argument: ¨It is fine to remain sceptical about business; indeed, in many particular cases our scepticism forces business to improve. At the same time, we should be much less hostile to business in general, and much more appreciative of its role in improving our lives, whether as consumers or as workers, or possibly as entrepreneurs ourselves.¨

I would recommend this book as the most optimistic possible view of the contemporary American corporation.