'Just completed a classic of American history for young people, Russell Freedman's, Lincoln: A Photobiography (HMH Books for Young Readers, 1989). Back in its day, the book won a coveted Newbery Medal. 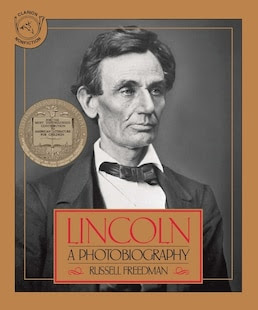 For this Canadian, Freedman's book was an excellent and reliable introduction to President Abraham Lincoln's story. Insofar as I remember the general outline of Lincoln's public life, Freedman covers the bases in a dependable manner and includes an amazing series of archival photographs. The cover photo of a clean shaven Lincoln is fascinating. Apparently, Lincoln was the most photographed man of his time.

Perhaps the most striking thing about the book was its tone. Freedman manages to present Lincoln in a way that is appealing and upbeat while not sweeping away the darkness of his time and work or the depression in his personality and family.


The book sweeps through events and words of epic proportions - and helpfully includes a selection of Lincoln quotations to close the book. It is all understandable and memorable. I expect that people will remember the life of Abraham Lincoln as Freedman tells it, for many years to follow.

Freedman's clarity does mean that the book lacks the questions that might lead to further investigation on the part of the youthful reader. A reader could go away from this book thinking: "Now, I know about Abraham Lincoln. Time to move on to something else."

For example, Lincoln was a man of many relationships. Freedman wisely reduces the complexity of Lincoln's biography by only fleshing out a few: his wife, Mary Todd, Stephen Douglas, and Frederick Douglass. But other than Lincoln's struggle with his military generals, we miss so much that could be learned from Lincoln's fascinating series of clashes and negotiations, compromises and victories.

Despite its age, Freedman's book is still a worthy introduction to the life of Abraham Lincoln for both adults and youth.